How to Interpret the Charts

Match ups are evaluated using the standard Win-Loss notation present for many fighting games. This notation utilizes odds as a way to indicate an advantage (or lack thereof) in any match up. A 4-6 match up is one in which the character will win four games for every six that he loses. We can choose to instead think of this in terms of probability and say that the character will win four out of every ten games played, or a 40% probability to win an individual match.

The following definitions are used for each match up categorization.

5-5: Even match up. No discernible advantage on either side.

6-4: A discernible advantage. One player has to work harder, but can feasibly overcome the match up.

7-3: A strong advantage. The greater character can function as a counterpick.

8-2: A very strong advantage. Winning as the lesser character is borderline impossible.

9-1: An overwhelming advantage. Victory is all but ensured for the greater character.

Interpreting the Match Up Chart

In the match up chart, we display only the first number of the aforementioned notation and assume that this is the number of wins out of ten matches that a character will get in the match up. For example, the circled ‘6’ in the diagram below indicates that Atom has an advantage over Atrocitus in the Atom vs Atrocitus match up and will win six out of every ten matches played. 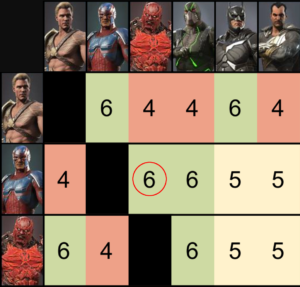 The tier list orders characters based on a special scoring system. Each character starts with 100 points. All of the character’s match ups are categorized and totaled, then points are allocated to comprise their total score. In the event of a tie, characters are sorted such that those with less unfavorable match ups are higher.

The important aspect to note about the scoring system is that it is loss-heavy. The worse the match up, the more profoundly it impacts the score. The following points are added for each match up that a character has.

As explained above, match ups can be expressed in terms of probability rather than odds. We begin by expressing the point allocation P as a function of the probability of any given match up x.

We want unfavorable match ups to be increasingly punishing the worse that they are while also making favorable match ups provide diminishing returns. We can easily achieve this by taking the inverse of the probability of each match up. Thus

To accentuate the differences, we increase the expression by a factor of 2 to yield our final equation.